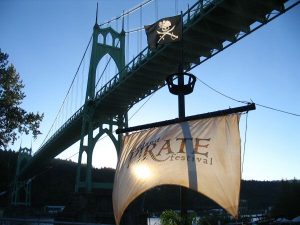 I was just notified about the Portland Pirate Festival coming up on September 18-19, 2010. It sounds to me that if you’re anywhere near the City of Roses, you won’t want to miss it.

For two straight days, Pirates will overrun Cathedral Park in the shadow of the St. Johns Bridge. There will be music, activities, entertainment, a 19th century privateer, cannon fights, and many costumed buskers. You’ll be able to buy all sorts of nautical, historical, and piratical crafts, costumes, and toys. And fear not, there will be plenty to eat and drink.

To make this event even more special, they will attempting to reclaim the Guinness World Record for most people dressed as pirates in one place. Anyone old enough to write their name in the log book qualifies, so dress up the entire family and get down there on Sunday, September 19, 2010. Their goal is to have 7000 pirate-clad revelers of all ages.

If you can only make it on Saturday, don’t worry, because you will be able to witness the first ever Stumptown Beard and Mustache competition. Man… you’ve gotta love Portland!